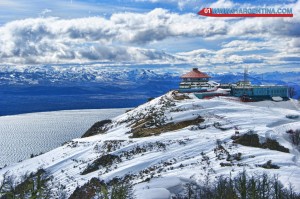 The Otto hill is a mountain located in the Nahuel Huapi National Park Patagonia Argentina. It has a height of 1405 meters and is located on the southern shore of Lake Nahuel Huapi, near its eastern end.

The hill is named after Otto Goedecke, one of the early pioneers who had his farm on the slopes of the hill, near Melipal.

From Confectionery Swivel Cerro Otto can be seen from various points of the city of San Carlos de Bariloche, in this iconic site with its slow movement allows a 360 degrees while delicacies tasted like venison hunter or Goulash with spices, all sprinkled with fine wines, but also offer quick meals. Also an original cultural shows devoted entirely to great Florentine artist, Michelangelo Buonarroti, with the replica of his most famous sculptures in natural size is offered inside.

The Confectionery Swivel located at the top of the hill is formed by rotary body such propiamante and two lower levels found in the Otto House Music, Student lounge or Convention Hall. At 1405 meters above sea level, Confectionery rotates within 360 ° in a time of 20 minutes for the passenger, meanwhile, will delight watching scenery .This Confectionery revolving, unique in the country, has a diameter of 21 m., with a capacity for 250 passengers comfortably seated. It is glazed in its entire circumference with tempered glass Blindex heating system and hot air. A seismic reinforced concrete structure supports the overall construction and similar to the floating audience that constantly rotates with a softness and typical clock synchronization. Consists of several circular rails on which bogguies battery operated electric motors specially designed 4 slides.

From this you can see confectionery route 40 going south to the province of Chubut; and the background the city of Bariloche in its entirety, plus the Coal hill, the hill and the hill Ñireco Window, named after the hole formed wind erosion. Besides the blue mirrors Gutierrez Lake, Nahuel Huapi and Moreno east and west from the heights one can see the big lifts Frei, the Cathedral, the Thunderer, the Goye the Lope’s Bell and Bella Vista. Moreover among the activities that can be performed on the premises of Cerro Otto are varied and are prepared for young and old; since the launch sled until snowshoeing through the beech forest.