Why are most whales Puerto Piramides Chubut 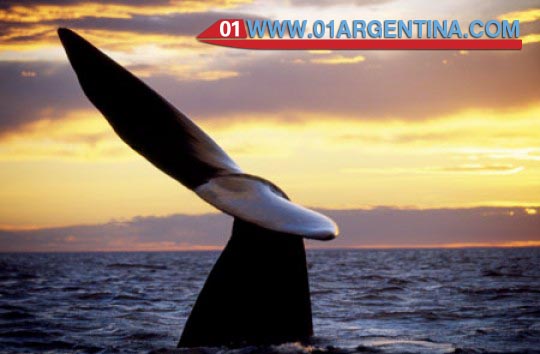 It is a huge attraction. The southern right whale elected every year between winter and spring, the waters around Peninsula Valdes to breed and give birth and care for their hatchlings. They are giants. They arrive hundred and you may observe from shore or boat. A spectacle of nature impossible to forget.

The whales come to the waters around Peninsula Valdes, mainly marine currents of Caleta Valdés and San Jose and Nuevo gulfs between March and May and reach their maximum during September and October. Towards the end of December almost all undertook the migration to feeding areas.
Their protection in 1984 were motivated declared Natural Monument by the national government.
Right whales are displayed permanently. Unlike other whales, this species spends much time in surface displaying its tail, fins, most often your back and even are able to dazzle the observer jumping putting most of his body out of the water.
In general, the southern right whales reach 30 to 40 tons. Adult females measure an average of 13 meters, although specimens have been spotted 16. Males grow up to 12 meters.
They have two characteristics that distinguishes them from other larger species. One is his way to exhale in a “V”, raising columns of condensed air up to 4 meters high. Thus expire by two external blowholes or spiracles, which are located on the top and back of the head, and are sealed to dive, to prevent water from entering the airways.
His second feature has to do with the formation of calluses, which are areas of skin high of 5 cm thickness approximately corneal consistency, located in different parts of the head. The distribution, size and shape of corns vary from a whale to another but do not change with growth. Functioning as our fingerprints, identify each animal throughout life. Besides these calluses, whales have a smooth, elastic and black skin color that sometimes is mottled brown and gray with white ventral and dorsal blotches of different shape and size. The epidermis, clearer in the offspring or calves, overlying a thick layer of fat, 14-36 cm thick, which acts as protection for the low temperatures of the southern seas.
Curious and gentle, right whales swim slowly in the cold waters, with a top speed of 9-11 mph, jumping and hitting the water with fins and tail and a distinctive symbol is sexy colossal Chubut offers between winter and spring to tourists worldwide.

None of the behavior of these great whales goes unnoticed, but mating is an exceptional phenomenon. It is a kind of ritual, in which a female and seven male involved. She refuses to be coupled, standing belly up. Then two or more males try to turn it around with their bodies, so that each group can achieve copulation. Success was achieved when the female should be back to breathe, when males waiting around. In the procession, which can last from a few minutes to several hours, it is likely that all males achieve its mission.
Gestation lasts 12 months and on the same time, the female nurses her calf, which at the time of birth is 5.5 meters. When they reach sexual maturity at 5 or 6 years of age, females with reproductive potential return every three years to the Valdés Peninsula area, looking for safe and quiet waters to give birth to a single calf. In contrast, males return every year to the area, being in the months of October and November the highest concentration: 350 to 400 whales. This makes Valdes Peninsula is the most important area of the southern hemisphere breeding.
After the breeding season, the whales begin their annual migration in search of food. However, their travels so far unknown. Some researchers assume that come to Georgia Islands, chasing krill swarms, but other scientists say are aimed at open sea between Africa and South America.
In order not to disturb the whales during the breeding and reproduction, Chubut authorities only allow navigation in the New Gulf and only to tourist companies enabled, you must also obtain authorization from the Naval Prefecture Argentina. The boats leave from Puerto Piramides, coming close enough for a good sighting without causing disturbances.