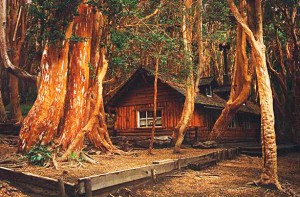 The starting point is Port Handkerchief then begins the walk navigation in a frame of snowy mountains and lush forests. On the clear waters of Lake Nahuel Huapi is reached Victoria Island, the high cliffs of.

Pine forests, evergreen beech and birch, stories and legends appear to be designed to amaze, with its mysteries, traveler. A reservation of native animals (pudu pudu) and exotic (red deer and golden pheasants), is ranger school and a warm lodge give life to the island.

Then after a few more minutes of navigation, the tour continues to reach Quetrihue peninsula which has the famous myrtle forest, unique in the world because of its size, density and development of its copies. Contemplating the myrtle covered in white flowers or snow-laden softly, we can feel that we are located in a magical dimension, different. 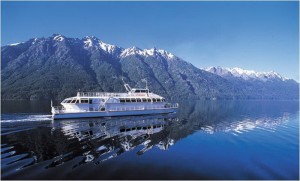 Scarf is part of port always accompanied by food hungry seagulls that provide passengers follow the catamaran in part of its course. Upon entering the Blest, you will pass by the island Sentinel, where the remains of Perito Moreno, creator of the National Parks.

After an hour of browsing, you arrive to Puerto Pitchers for Valdivian jungle internase in a staggered path leading to rising Laguna Los Pitchers, whose drainage feeds the waterfall. Back can take another lake Frias navigation from Puerto Alegre is enjoying a wooded landscape in which stands the imposing white silhouette of Mount Tronador. 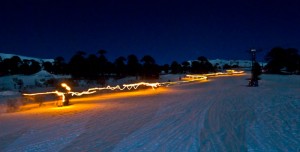 This hill is named for its towering cathedral that resemble a Gothic Cathedral, the same crown the summit.

To reach the hill on the road is Playa Bonita then find the Virgen de las Nieves thus arriving at Villa Cathedral located at the foot of Cerro namesake. In winter, where winter sports center, Antonio M. Lynch takes skiing to national and international level, as well as other disciplines that relate to the snow.

The Snow Day with the fires of Cathedral and torchlight parade, catches and excites those who come from across the country and the world to experience the magic of Cerro Catedral. 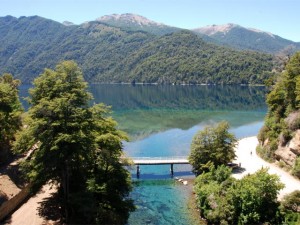 Navigating a path winding through ancient forests and woodland of beech, cypress and evergreen that runs along the north shore of Lake Nahuel Huapi, you get to Villa la Angostura.

Bordering the picturesque Lake Meliquina and then the river of the same name, you get to Casa de Piedra. It is a cave in the rock that can be accessed without difficulty. On the way you can see the countless figures appearing in the weathered rocks formed 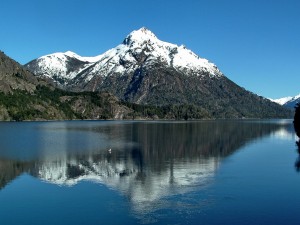 On the way you can enjoy the lake and then the lake Gutierrez Mascardi horseshoe shaped, also called lake of seven colors. From the foot of Mount Tronador you can reach the same glacier tongue: The Black Glacier, a glacier black whose origin is the immaculate white of the summit of Mount Tronador.

South of Bariloche is the town of El Bolson. The route to get bordering lakes Gutierrez, Mascardi and Guillelmo Villegas crosses rivers, then the Quemquentreu Foyel. You can visit a trout farm, a brewery, a candy factory and reach the Bolson a visit to the craft fair which brings a huge amount of local producers.

This circuit begins in Bariloche has spectacular scenery, Lake Nahuel Huapi is Nice beach, appreciating there Huemul Island then reach the foot of Cerro Campanario, there a chairlift that leads to the summit (1050 m) from where you can seen one of the most beautiful views of the region. Are observed lakes Nahuel Huapi and Perito Moreno, El Trebol lagoon, Peninsula San Pedro and Llao Llao, Victoria Island, the hills Lopez, Goye, Otto, Cathedral and the city of San Carlos de Bariloche. After passing through the San Pedro Peninsula, lies Llao-Llao. There is the San Eduardo Chapel, regional architectural gem on Lake Nahuel Huapi the Puerto scarf. Angostura Cross the bridge (over the river of the same name) that connects the lakes Moreno and Nahuel Huapi and will reach a lookout point and take the road back to town.