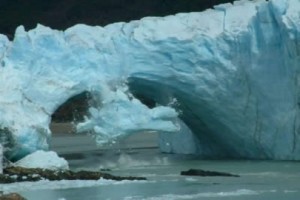 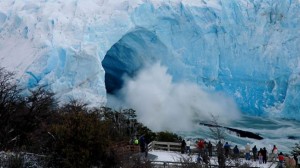 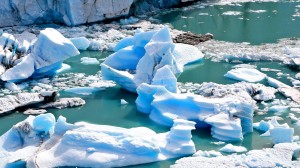 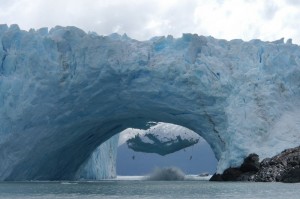 The Perito Moreno Glacier is an asset. It is one of the few in the world and the only one in Patagonia progresses , unlike others such as Upsala , which are in the process of extinction.
This development , approximately 100 meters per year , generates another shocking phenomenon of beauty : the breaking of the dam that forms in the Rico Arm of Lake Argentino, and that advancing glacier , touch the opposite coast and is the dam that cuts off the water. Then the water is filtered under the glacier and begins to undermine his base.
In 1917 saw the first break . The process has been repeated many times , at regular intervals even have to fear for the demise of so prodigious show. Is that for the break occurs is necessary to comply with a series of steps that depend heavily on natural action and other adverse changes both the man has made on the environment .
Lake Argentino, water surface on which rests the town of Perito Moreno ice has several branches . The arm called Rico is behind the Magallanes Peninsula and empties into Lake Argentino through Iceberg Canal . When the glacier advances that touches both the coast of the peninsula formed a dam that prevents Rico arm drain into the lake.
This arm continues to receive water and snow to exceed the level of the lake by 8 or 10 feet and increasing the pressure on the dam. To reduce the pressure in the water begins to seep through the sectors where the glacier has ground contact . The flow of water erodes the base of the dam until the pressure is unbearable and that’s when the fracture occurs as expected , generating witnessed the phenomenon in a shudder deep and indelible .
One of the latest breakthroughs was in 1988 and when he feared for his disappearance happened again with unexpected frequency in March 2004 and 2006. Experts say it is possible to predict such an event .
There is every reason to be attentive to the work of the Perito Moreno ice . Each fracture is unique and unrepeatable. And while it is difficult to predict what will happen in the coming years , we can expect that to happen again , to once again enjoy the beautiful spectacle of this giant Patagonia.
Another break memorable was the 2008, to occur in winter witnessing an unusual event since such phenomena are common in summer.
From the Department of Tourism of Santa Cruz have clarified some mistakes people make when talking about the mythical Perito Moreno ‘s around . One of them has to do with the size of the colossus . The truth is that the Perito Moreno has a length of 30 km, an area of ​​257 km2 and a height ranging from 50-70 meters above the lake level .
And another is related to the idea that spreads about ” the breaking of the Perito Moreno glacier occurs cyclically every four years.” The historical records show that the first opening documentary from 1917 , without specifying the time of year , in 1926 the geologist and founder of the Museum of Paleontology Trelew , Egidio Feruglio , spoke of an opening to ” allow the passage of a small boat ” , in February 1940 rupture occurs glacier front , followed then 1942, 1947 , 1949 , June / July 1951, March 1952, March 1953, 1956 and then a big break until 1966 .
Then, the frequency is even more variable : 1970 , 1972 , 1975 , 1977, 1980 , 1984 and 1988 . From then on, a long silence that was broken in 2004 , two years later in 2006, in 2008 , in 2012 and in January 2013 , although the latter is not technically considered a break because from the National Park Los Glaciares argue that did not fully close the bridge.