Things to do in Ushuaia

Below we describe in this article 2 activities to do in Ushuaia, Patagonia Argentina

The Cerro Castor Complex is located only 26 kilometers from the city of Ushuaia on National Route No. 3. Like the city, the ski center of Cerro Castor is the southernmost in the world.
Its geographical location and orientation of the tracks allow for a perfect powder snow for downhill skiing, skiing and snowboarding.

End of the World Train 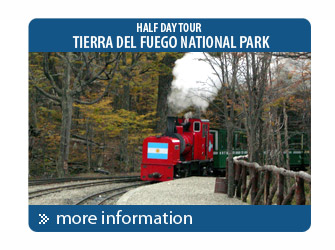 End of the world train

The End of the World Train, was formerly known as the Prison Train as was used in the first instance to transport the materials used to build the Presidio of Ushuaia and then to move the wood from forests.
It was a small narrow gauge railway that ran on steam locomotives fueled by wood, the extension of the railroads grew to 25 kilometers and were made 2 trips per day.
The Prison Train operated until 1952, in 1994 returns to its historical journey as the End of the World Train. The world’s southernmost train makes its way into cars that resemble elegant era of steam locomotives. The journey begins at the World’s End Station, located 8 km. west of the city, the tour lasts one hour and forty minutes.
This tour is recommended for the whole family, children will enjoy the train whistles, maneuvering area and steaming locomotives, while their parents can enjoy tea, take photos or just relax with the nice landscapes of Ushuaia. In the first stage skirts the Pipo River, near it may be possible seeing herds of wild horses. At the first station stop called Cascada de la Macarena is a reconstruction of the huts were done by the Indians of the area, the Yamanas, by another path you can reach the small waterfall, the stop lasts 15 minutes. The journey continues touring the National Park Tierra del Fuego allowing travelers to enjoy rivers, waterfalls, mountains and forests of beech and evergreen.