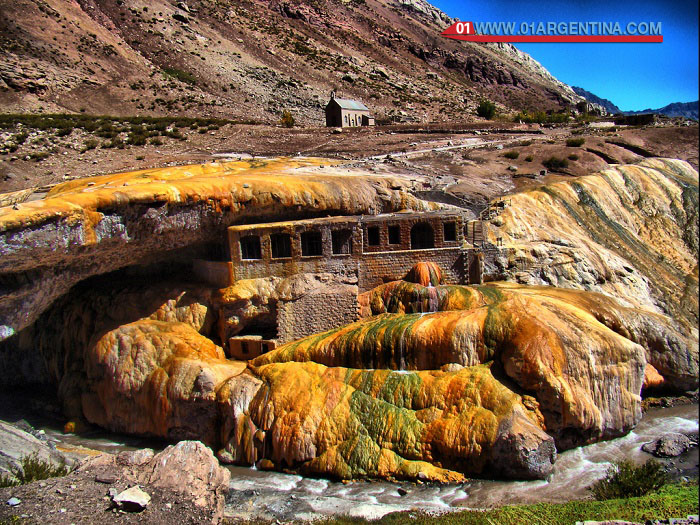 Four proposals to fully enjoy the most beautiful in the region of Cuyo in Mendoza Ysan Luis. Plus options for exploring the Patagonia Argentina, with its nature Peninsula Valdes and the rich history of several Welsh towns in Trelew.

Tour packages in Mendoza: Enjoy landscapes, wine and hot springs in Mendoza.
In the circuit of High Mountain the international route to Chile where you can meet is crossed: Potrerillos and its dam; Uspallata Valley, Penitentes Hill, its peculiar shapes and its famous ski resort; the amazing Inca bridge, its history, also its hot springs and Parque Mirador del Aconcagua, the highest mountain in the Americas.
Wine is one of the hallmarks of Mendoza and various proposals for excursions you can enjoy the magic of wine in the cellar Maipú, a circuit positions mountains and visits to various wineries such as Catena Zapata, Vistalba, Casarena, Dante Robino, Benegas, Highlands and Clos de Chacras, among many others.
Relaxation and hot springs are located within the proposed circuits Water Park Termas Cacheuta which is 38 kilometers from the city of Mendoza. Surrounded by the Andes and along the Rio Mendoza, the Thermal Park has different pools at different temperatures and picnic facilities that allow enjoy throughout the year.
Also in the “Heart of Mendoza”, San Rafael, you can choose to transfer to the main attractions. In the circuit “Las Leñas” as they visit sites: Cuesta of calves; Diamond Salinas; Villa Sosneado; The El Infiernillo; Valle de las Leñas resort; The mysterious Well of Souls and Laguna de la Niña Encantada, a dream place with beautiful greenery and blue waters.
Another must-see site is the Canyon Atuel. Transfers to the Canyon on Route 144 are offered, through the district table Benegas Cuesta of calves, Dique Nihuil. A path to admire the immensity of nature, reflected in the colorful and worn rock formations crossed by the river Atuel, walking inside the majestic Canyon and surprising us with the various formations as “The Monk”, “The chair Rivadavia” “The Wax Museum” among the best known.
San Rafael dams, is a tour to learn part of the history of the province of Mendoza, learning about their culture, admiring the beauty of its banks. Circuit by the Villa 25 de Mayo, site of cultural interest since in this town the ancient city of San Rafael is located, the tour includes the Dique Galileo Vitali, The Tigre dam and dam Reyunos.

Tour packages in San Luis
WAY OF THE Stores, SAWS AND DAMS
Transfer to El Volcan, a town east of the capital, where the natural spa La Hoya is.
Transfers to the city of La Punta, 20 km. the provincial capital. Founded in March 2003, it is the first city of the XXI century. The City of La Punta has 7 tourist icons: best racetrack inside the country, Hippodrome La Punta, the Football Stadium “Juan Gilberto Funes,” the movie set, the replica of the historic Cabildo 1810, the Data Center, Astronomical Park and the University of La Punta.
Terrazas del Portezuelo CIRCUIT AND Potrero de los Funes
Hito transfers in Terrazas del Portezuelo. The tour continues through the “Monument to Independence Village Puntano” up to Potrero de los Funes. Potrero de los Funes is a city with many attractive places such as “Box of chessmen” and “Confectionery Floating”.

From Puerto Madry or Trelew
During the tour you can see in Carlos Ameghino Interpretation Centre part of the story, the terrestrial fauna, marine and avifauna. The circuit continues on dirt roads, arriving at Punta Norte and Caleta Valdés, continental elephant seal rookeries. Rheas, guanacos, maras, armadillos, foxes, skunks, eagles, Patagonian owl, etc.: all the way natural inhabitants of the peninsula will be discovered
The road continues to Puerto Pyramid, a picturesque village on the New Gulf with crystal clear water that make it a paradise for divers and naturalists. In times when the Whale up to mate and bear their young (June to December), you can do whale watching. Upon return, you will visit Puerto Madryn, landing point of the Welsh settlers. The racetrack will pass through the only aluminum plant in the country – Aluar – Fisheries Industrial Park, Pier deepwater Almirante Storni, where dock Tour and international cargo vessels.

Circuit by the main attractions of the city of Trelew, where you can optionally visit the Paleontological Museum Egidio Feruglio. Then continues to Dolavon, Welsh people in that language means “Prado del Río”. They can see the flour mill, installed in the early twentieth century to process wheat harvested by the Welsh in the valley, the wells that were used to irrigate crops are also seen. Welsh chapels continues visiting circuit nineteenth century. Arriving at the village of Gaiman (Mapuche “sharpening stone”) other Welsh colony in the Chubut river valley below, where you can sample optionally the typical Welsh tea. Departure from Puerto Madryn and Trelew.