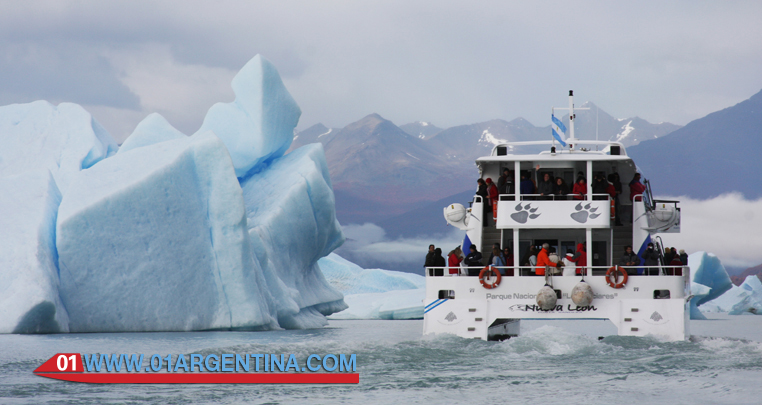 Glaciers are one of the main attractions of Patagonia.

The Los Glaciares National Park, southwest of the Province of Santa Cruz.

Icefields houses occupying 2,600 km2 (more than 30% of the area of the Park), advancing on two large bodies of water, Lake Viedma and Lake Argentino.

The best known is the Perito Moreno glacier, which expands on the waters of the South branch of Lake Argentino, with a front of 5 km. and a height, above the lake level of between 70 and 60 meters. This majestic wall of ice covers an area of 230 square kilometers.
Upsala Glacier, located on the north arm of the same lake, is the largest; It exhibits a length of 50 km. and a width of about 10 km.
In the northern sector of the Park, opposite the glacier Viedma, is the imposing massive stone Fitz Roy or Cerro Chalten (as it was called by the Tehuelches who inhabited the area) which stands out for its height of 3,375 meters and its monumental aspect with the environment of the surrounding mountain ranges.

The area of continental ice and glaciers is a natural treasure, a World Heritage Site by UNESCO in 1981.

This ancient ice forming an angry white is crossed by glistening cracks engamadas between blue and violet. From the depths gush sounds immersed in the restless inside the glacier rivers.
Perito Moreno glacier slides at a speed of 100 meters per year, forming a barrier between the Brazo Rico and the Canal of the Icebergs Lago Argentino, which ends up producing so famous break its walls because of the great pressure water exercises.

Every four years about large blocks of ice break off with a similar magnitude shocking thunder roar, creating icebergs that are dispersed in the lakes by the action of wind and water. Pieces of ice can reach and lift large waves, so it should not get out of the observation area.
Due to changing climatic effects of the past decade, glaciers in general are at an increasingly accelerated extinction, these detachments not always happen every four years.

On the south bank of Lake Argentino, the tourist town of El Calafate is the gateway to Glacier. 80 km from the park entrance, this small town of 6,000 inhabitants has a variety of accommodation and food.

From El Calafate up to the town of El Chalten, 240 km in the northern part of the protected area. Nestled at the confluence of the rivers De las Vueltas and Fitz Roy, Patagonia small and colorful village has only 300 inhabitants and about 600 hotel beds.

This population of only 15 years, is prepared for rest, sport and adventure; It is known as the capital of trekking and is the basis of those climbers who want to climb the Fitz Roy or sheer vertical granite wall of Cerro Torre (3,128 m). The hills dominate the landscape and can be seen from various strategic points in the area, even a few kilometers before reaching the town.

The austral summer is the most favorable time to visit this area, the high season from November to late March. It is convenient to make reservations in advance if you plan to travel on that date.

The most relevant sites are the trails and balconies on the Perito Moreno Glacier. The walk on one side of the glacier. land excursion to Lake Roca, from early morning, when many eagles, owls and condors are.

Trekking in the park and hike to Lago del Desierto (outside the park) from El Chalten. Catamaran sailing on the lakes near the Spegazzini and Upsala glaciers, or the trip to the bays Onelli (filled with three glaciers Icebergs lake) and Estancia Cristina.

Other activities from El Calafate

Guided tours of the cave paintings of Punta Gualicho, facing the Argentino Lake (10 Km) excursions. You can arrive by car or rides during organized from El Calafate.

Information about Glaciers in Patagonia

Despite how impressive they may seem today glaciers, strictly speaking, are only small segments of what was the last glaciation. However, they have a remarkable importance occupying 10% of emerging treasuring land and 90% of freshwater poses. Generate air and water currents that contribute to balance the Earth’s climate. In the southern Patagonia, the first glaciation occurred 3.5 million years ago, extending at least 60 km east of the current range. Another great glaciation would have about a million years ago. The terminal moraines of this can be seen in south plateau of Santa Cruz River to the height of Condor Cliff, nearly 200 km away from the current Cordillera. Even with some disagreement among scientists, it is estimated that the ice only covered the Patagonian plateau in its southernmost part, ie, south of Rio Gallegos, where a huge tongue extended over the current Strait of Magellan (which is nothing but another valley formed by ice and then invaded by the sea) and almost all of Tierra del Fuego, as they seem to indicate moraines found under the current level of the Atlantic. In the rest of Patagonia, the ice advanced by major west-east axis without reaching the Atlantic Ocean at any opportunity.
Glacier National Park “Los Glaciares”
In Patagonia there are several types of glaciers, but certainly the most characteristic are the icecaps called Patagonian Icefield North and South Patagonian Icefield:Stay Alice (the Galpón Glacier) makes herding demonstrations and sheep shearing and organizes rides to Perito Moreno Glacier (21 Km).

The Southern Ice Field (named locally as “Continental Ice) which represents the third mass of the world’s largest ice is the largest area of the two and extends over 350 km from 48 ° 20’S to the 51 ° 30’S with an area of 16,800 square kilometers. The surface of the continental ice in Argentina is 2600 square kilometers. Most of this area is within the boundaries of Los Glaciares National Park.
Of the continental ice mass descend as “overflow glaciers” 13 glaciers to the basins of the lakes Argentino and Viedma, many of which reach the level of the lakes producing fantastic landslides and icebergs.

The largest glacier surface are:

The surface covered by ice National Park is approximately 2600 square kilometers, representing more than 50% of the total protected area (not counting the area of National Reserve).
Glaciers are thick ice masses originating from the earth’s surface by compaction and recrystallization of snow and under the action of gravity, move from the accumulation area to the ablation zone (where the ice leaves the system melt , evaporation or by forming icebergs)

Glaciers form in areas where more snow accumulates in winter than in summer melts. When temperatures remain below freezing, snow fall changes its structure as evaporation and recondensation water cause recrystallization to form grains smaller, thick ice and spherical shape. This type of snow is recrystallised known as firn. As the snow is deposited and becomes firn, the lower layers are subjected to increasingly intense pressure. When layers of ice and snow have thicknesses that reach several tens of meters, weight is such that the firn begins to develop ice crystals larger.