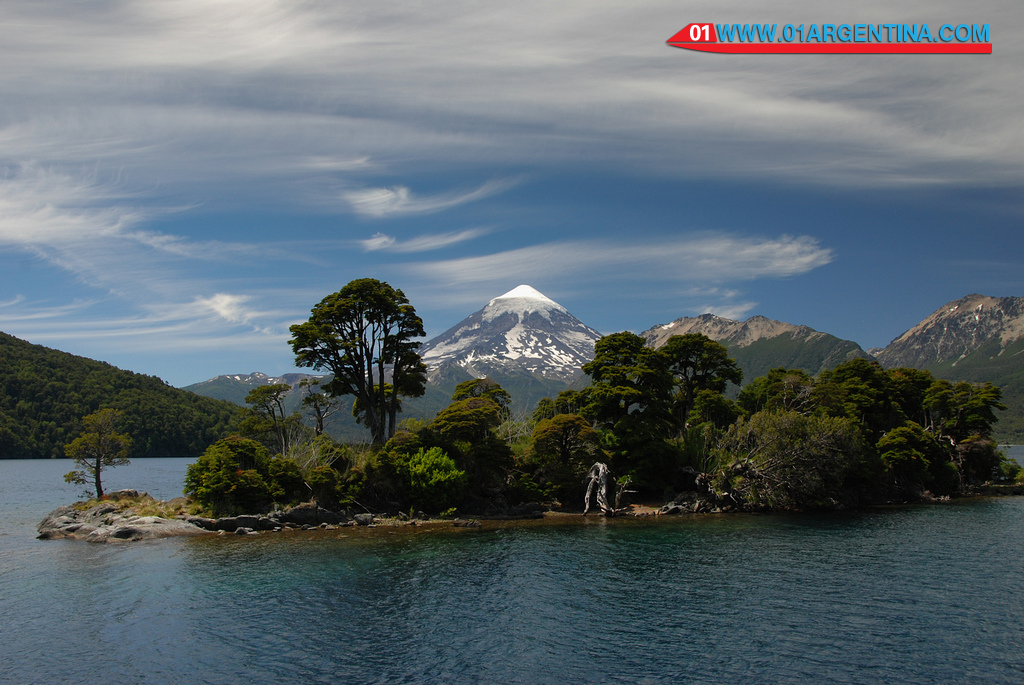 Lanin National Park is a national park located in the Argentine province of Neuquen in the north part of the region Patagonia Argentina. Part of the reserve Andino Norpatagónica since 2007.1 The surface of the Lanin National Park is divided into two management areas: national park with 216 993 ha, and the area protected resources managed 195 010 has been divided into three reserves denominated Zone Lácar Area Ruca Choroi, and Zona Malleo. Decree No. 2149/90 of October 10, 1990 appointed six sectors of the first area as a nature reserve estricta.

Within the Lanin National Park there are 7 Mapuche communities who occupy 24 000 hectares; 12 settlements of non-indigenous population; 12 rooms of private property they occupy 24 323 hectares; August 1871 private subdivisions with lots covering 26 865 hectares; and around 4000 hectares of Argentine Army.

It has an area of ​​412 003 ha, which makes it the third largest national park in Argentina. Assorted cold inhabit forests formation called Andean Patagonian forest and Valdivian forest, mainly large trees in the group of conifers and Nothofagaceae, trees many not present in other parts of the Argentine territory and centennial data. unique in the area of ​​Lake Lácar – – pellín oak, myrtle, and mountain cypress, among others coihues, beech and Araucaria or monkey puzzle, rauli male and female maniú maniú can be found.

It is well known by the conical and snowy volcano Lanin and adventure tourism options offered. Lácar and Huechulafquen lakes are the most visited, but it has other as Paimún, the Curruhué, the Meliquina or Lolog. In its various lakes and rivers abundant salmon and trout fishing. Many of these fish are grown on farms in the area, to prevent depopulation of the fish fauna. It also has several waterfalls and cascades, among which you can highlight the Chachín waterfall on the eponymous river.

The native and non-native fauna is very similar to that in the Nahuel Huapi National Park which borders the south, with differences in a slightly greater variety of species of the genus Nothofagus and the presence of pehuén, which is completely absent at that.

The nearest towns are Junin de los Andes and San Martin de los Andes; the latter has a large infrastructure that includes a winter sports resort in Chapelco. Something far these two are relatively close to the town of Aluminé park. Another nearby village is Rucachoroi, populated mainly by Mapuche doing interesting crafts (mattresses, bread “nut” of pehuén, sweet Llao Llao etc.).

San Martin de los Andes is a city in the southwestern province of Neuquén, located in the Cordillera de los Andes, Argentina, on the eastern shore of Lake Lácar, and is a major tourist destination in the province.

In 1898 Rudecindo General Roca, head up to the Force, decided to reoccupy the strong Maipú (which was empty) and found a town on the shores of Lake Lácar, in order to establish sovereignty over the region. Thus, the February 4, 1898 Colonel Celestino Pérez, obeying the orders of the latter, founded San Martin de los Andes, the Patagonian town last framed in the campaign to the desert.

San Martin de los Andes is the head of the department Lácar, is at 640 meters and 1575 km from Buenos Aires.

It is one of the most important tourist spots in the province of Neuquen and Patagonia. By National Route 401 is accessed and has an airport 22 km from the center.