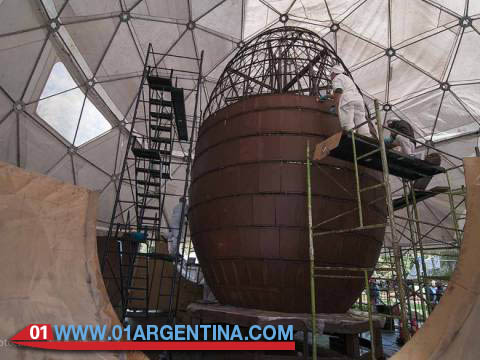 In Bariloche they began to place the first plates on the huge structure. in order to begin to build the giant chocolate egg that will be showed during the city tour of Bariloche  next Sunday and  it will be about eight tons of billet exquisite treat.
For the fourth consecutive year at the Civic Center of the town began to build a giant chocolate egg, that will be chopped and divided among those attending the Easter Sunday.
The square was installed a globa and inside the structure of 8.5 meters high and 6.5 meters in diameter in its most ancha- part is impressive and demonstrates why part of the Guinness Book of Records.
Atop already began assembling the first plates of chocolate with the help of a ladder and some workers airborne by harnesses.
In total about eight tons of chocolate is used.
The assembly is responsible nine chocolate masters, contributed by local chocolate companies, who lead brigades formed by pastry chefs and students of the School of Hotel and Gastronomy. We work in shifts, but with a line and a defined protocol.
Fernando Nordenstron is a master chocolatiers who is responsible for the process.
He said this year the times are minor and should work in full swing to comply with the same timing.
He noted that three editions the build system was perfected.
“Now we know and we make a great team,” he said.
In the square there are two tents: one for the egg and one for the kitchen.
Together with the structure supporting two giant egg molds where chocolate plates were positioned taken curvature. There the chocolate is mounted to crystallize it takes “a couple of hours,” said the teacher.
However, time is not the only enemy of these artists chocolate.
High temperatures also pose a danger.
Therefore air conditioning equipment will be installed inside the egg, to keep a good temperature and ensure it reaches unchanged until Easter Sunday.
It works 8-20, in two shifts.
Chocolate plates are placed on the structure, but given the ambient temperature, struggle to maintain consistency. Yesterday the arrival of the cold equipment hurried to consolidate construction.
The cast of big chocolate egg is becoming a tradition in Bariloche.

HISTORY OF CHOCOLATE IN BARILOCHE

The cocoa tree originated in the Orinoco River basin, and subsequently be expanded into several regions. In beginning the Maya, and later the Aztecs, spread their taste for the drink was made from its seeds; and in some regions were so valued that were used as currency for trade at the time.
Historians consider that maybe it was Christopher Columbus in 1502, the first European to taste the chocolate drink predecessor, on his fourth voyage to the New World.
Back in the Iberian Peninsula, the conqueror brought cocoa to the Catholic Kings, but the look and bitter and spicy (they added chile Aboriginal or achiote) were unhappy.
Hernán Cortés, however, was luckier, as found in the drink an energizing food, he said, “when you drink it, you can travel the whole day without getting tired and without having to eat”; and, of course, discovered the mercantilist value of seeds to trade with the Americans. In the sixteenth century, managed to enter the custom Aztec at the Spanish court and, consequently, in the higher strata of society.
From there, the versions are found, because there are different hypotheses about the origin of the incorporation of sugar or cinnamon. Some referred back to Mexico, with the influence of Chinese cinnamon and expansion, promoted by the Spanish, sugar cane on the continent. Others indicate that, in fact, Europeans were the ones who came up with the recipe.
Soon the news, like all good news began to circulate in Europe, and in 1606 the making of chocolate to Italy through Antonio Carletti. Nine years later, cocoa landed in France through marriage to the daughter of Felipe II, Ana, with King Louis XIII of France. For 1646, he was in Germany and arrives in England nine years later.
Only in 1746, the water is replaced by mixing chocolate with cocoa; also incorporating eggs, alcohol or vintage wines. But years later won an Italian produce solidification. The first chocolate factory settles in Switzerland in 1819. In addition, nine years later, a Dutchman, Van Houten Coenrad, get cocoa powder, placing his country at the head of the production of chocolate.
Undoubtedly, with the passage of time, this product has its origins in pre-Columbian America and was perfected and tasted by Europeans, today has become a major unnatural attractions Bariloche.
Over 50 years ago two Italians, Aldo and Ines Fenoglio, settled in the city and amazed with handmade chocolates, giving rise to the first artisan chocolate factory in the country, which has to his credit, even with the invention (by accident) the famous “chocolate sticks”.